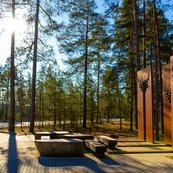 According to legend, a long time ago there was a rich city called Raigardas in this valley, whose inhabitants were always feasting and over-celebrating, and thus they made the thunder god Perkūnas angry. Their behaviour led to the destruction of the city – it collapsed and vanished underground, and only the sound of a bell from the cursed ones looking for an exit from the underground realm could be heard coming from beneath the surface. That exit is blocked by the Devil’s Stone at the edge of the valley near Švendubrė. The salty waters of the Druskininkai are said to be the tears of the doomed souls. 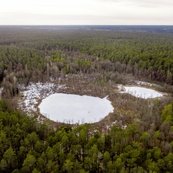 Virgin Eyes is a small swampy lake situated in an area surrounded by pine forests. The lake consists of two water bodies that are connected by a strait. Virgin Eyes can be reached by walking along a relaxing path, and on its eastern coast there is a pier from which you can enjoy the tranquillity of nature. Next to the lake, there is a memorial to commemorate the Merkys and Kazimieraitis partisans from Dainava District. Their remains were thrown into the Virgin Eyes Lake during the 1944–1953 period. 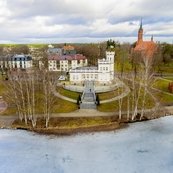 Druskininkai Town Museum is located in the impressive Neo- Classical villa of Linksma that was built in the beginning of the 20th century. This villa was once a summer residence of the Kiersnovski family, aristocrats of the Grand Duchy of Lithuania. It is now a symbol of the Druskininkai Resort, and concerts, exhibitions, other cultural events and marriages take place both in the museum and on its terrace. 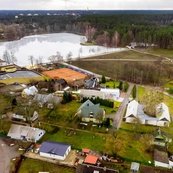 Mikalojus Konstantinas Čiurlionis, the most outstanding Lithuanian artist of all time, was born in Varėna, into the family of the organist Konstantinas Čiurlionis and Adelė Marija Magdalena Radmanaitė-Čiurlionienė. In 1878, the Čiurlionis family settled in Druskininkai. In memory of the Čiurlionis, the homestead belonging to his parents was preserved, and in 1963 the Mikalojus Konstantinas Čiurlionis Memorial Museum was established there. Based on the memoirs of Čiurlionis’ sisters, Valerija and Jadvyga, the authentic interior of the houses and the environment of the homestead were restored. This professional painter and musician has become a symbol of the Lithuanian identity, and his creative works are a testament to the modernity of 20th century Lithuanian and European art. The versatility of Čiurlionis’ talent is expressed through his music, art, literature and photography.

The gallery is located in the Arta Quarter, next to the Čiurlionis Memorial Museum, Jonynas Gallery and the Druskininkai Town Museum. Here, exhibitions are organised by artists and photographers from Druskininkai, Lithuania and abroad. The gallery has an art salon where paintings, graphics, jewellery, ceramics and leather items can be purchased. 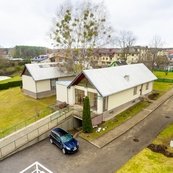 This gallery exhibits the works of Vytautas Kazimieras Jonynas (1907–1997), a graphic artist, painter, sculptor and stained glass artist of exceptional talent. The works include: paintings, wood carvings, lithographs, book illustrations, postage stamps, a sculpture and rich documentary material about the interiors created by the professor, as well as monumental art designed for churches. Until his death, Jonynas spent his summers in the gallery, talking with visitors and discussing his work. All of the pieces stored in the gallery are gifts from the artist to Lithuania. 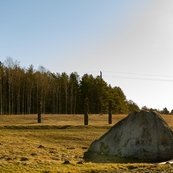 According to legend, the devil was carrying a large stone in order to block the flow of the Nemunas River, but the dawn started to break and a rooster sang unexpectedly early. The devil took fright, lost the stone and disappeared, while the stone rolled toward Švendubrė and continues to lie there to this day. Nowadays, there are wooden sculptures of the Bell Ringer, the Legend of Raigardas and the Shepherd Girl based on various legends that have been erected near the stone. 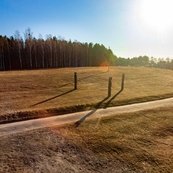 Švendubrė is an old ethnographic village located near the Raigardas Valley. The old Dzūkija homesteads with enclosed courtyards are particularly interesting, and the famous Devil’s Stone can also be found in this village. Švendubrė was first mentioned in historical documents from 1620.